Lee James Fine Art Gallery is located  in McGregor.  Lee James unique style of pallet knife painting and his love of color creates unbelievable canvases that rivet the eye.  Mostly having painted in Waco, Lee recently relocated to McGregor and has started images of McGregor as well. 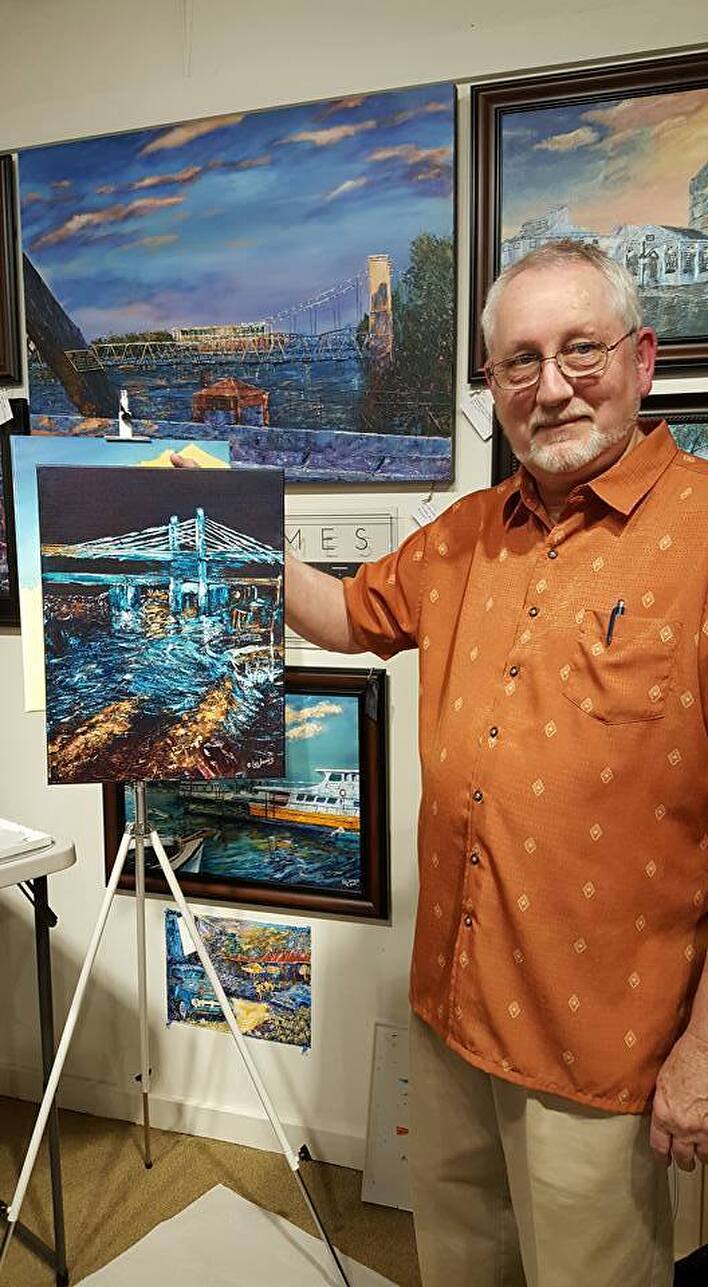 McGregor / Waco, Texas-based artist Lee James began his journey in fine art without really knowing it when he was about 9 years old. Growing up in Raleigh, NC, Lee always drew a lot…….cars, homes, house plans, architecture, etc. more as “technical drawings.” His work career in the corporate world in engineering, management, marketing, design, inventing, and corporate training prevailed for many years. Fine art would not come into play for Lee until later in life, when the time was right, and the influences were there to nudge him into this! The initial influence was his then 6 year old son, who while “bored” (again) one evening, asked him to draw a “super hero.” When he replied “I can’t do that”, his son immediately challenged him by saying “Dad, YOU always told ME not to say I can’t!!” So naturally he had to! His son’s challenge, soon to be followed by his wife’s challenge to try oils, kicked off his journey in the fine art world, while continuing in the corporate world. He never forgot being challenged by his own words being thrown back at him and still challenges himself with that in whatever he does.

He went on to have many interesting and challenging positions, including being selected to attend IBM’s prestigious Systems Research Institute in NYC. Along the way, he also began taking art courses and attending art workshops. In that time frame, his work was very realistic. It sold well, won awards, and was included in corporate, private, and state collections. An oil painting of Morro Bay won Honorable Mention at the N.C State Fair. His watercolor “Swansboro” was chosen for the 1995 North Carolina Wildlife Calendar and another watercolor “The Landing” hangs in a N.C Welcome Center. He was represented and showing at galleries in Raleigh N.C. and all along the N.C. coast, where his “Coastal Series” was very popular. But, he sensed even then, he was not where he wanted to be with art.

Corporate moves eventually had him moving to California, twice, and eventually to Texas, as well as stays in New York and Kentucky. After an early retirement from IBM, he went to Maine and studied with nationally known artists at The College of the Atlantic in Bar Harbor, followed by a week-long en plein air workshop with Carlton Plummer on the coast of Maine. He intentionally chose Carlton because he wanted to “loosen up” and shed some of that “engineer” leaning. And Carlton was perfect for that! That desire to loosen up, and training to do so, along with challenges his wife and son gave him, would eventually lead to an evolving artist. After many years as a corporate instructor and private art instructor, in 2015 he set out to discover who he really was as an artist, explore new directions, and “retrain” himself. That became an intense and amazing journey, one which will continue forever. He has created his own techniques of painting with acrylics using palette knives, bold use of color, texture, and contrast, to create impressionistic works that evoke an illusion of realism while staying true to his desire to interpret and create a unique scene. This evolution has been very well received and presents him with continual opportunities to grow as an artist……especially now that he has left the corporate world behind.

It’s all about art now…..finally. He immensely enjoys his new direction in his art and is thrilled to embark on each new painting. Lee is listed as a PRO on HOUZZ.com and also enjoys painting Fine Art Murals. His ultimate reward is your enjoyment of the “worlds” he creates in his paintings. Lee has a lifelong interest in architecture, having owned two National Historic Register Plantations and even designed homes. Structures of some type will almost always be found in his work. A love of coastal, boats, cars and trucks, and animals have also had a profound influence in his work as well as a strong interest in nocturnal scenes. Lee is not a “high noon” painter. Early morning, later in the afternoon, and evening….”these are the times when colors are more intense, subjects are more interesting” and will always be part of his works. With an intense love of color, Lee rarely mixes color on the palette, choosing instead to pickup multiple colors and “let it happen” as the paint goes on the canvas. “The result is far more exciting!”

Lee is a member of Texas Fine Artists, shows continuously in multiple venues, and is also represented by My Giving Tree Gallery and Gifts in Belton, TX.

Member and Ambassador, McGregor Chamber of Commerce and Agriculture